Why Don't You Go Fuck Yourself?

Fortunately, it seems the 21st century has given birth to a new breed of sexually open women, and we too like to get ourselves off. However, studies show that while 90% of the male population are wanking away regardless, only 65% of the total female population are. So I had to ask: what the hell are the other 35% doing? We successfully freed ourselves from the kitchen, but why are women still so reluctant to fuck themselves? 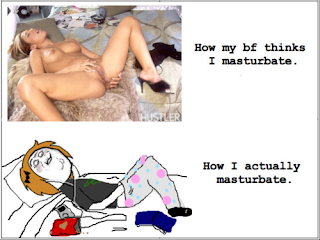 Personal sexual detour aside, I sincerely hope that the previously acknowledged 35% of non-masturbating women are simply too embarrassed to admit to it. However, I fear this is not the case.  You don’t have to trawl far through Google to find numerous accounts from women giving various reasons why they don’t do it. The main one which shocked me (probably because I’m a raging atheist) was that many women felt guilty because it is a sin in the eyes of God. My response? According to you religious folk, God designed the human body. Thus, God gave us a clitoris, which, if you haven’t yet noticed, has no other function than to give us pleasure. In addition, if Adam and Eve were the only living beings when the Earth was first created, what do we assume Eve did on the long nights when Adam had been working all day and claimed he was ‘too tired’? Ladies, God wanted you to enjoy yourselves so I suggest you go out, purchase the biggest vibrator you can find, and do what he asked.

And let’s be honest here, you need to give yourself some love because, when it comes down to it, can anyone really fuck you better than you can? My fellow females, let us not allow men to have all the fun; let us raise those statistics to at least 91%! My advice to the 35% who still don’t? Put some Glee on, bore yourself senseless, and let your hands wander. Get with the times, people: it’s the 21st century, and we’re all just a big bunch of wankers.

**As a side note, comments about anything in this blog that you may like or despise, and suggestions of something you would like me to write about are always appreciated!
Posted by Unknown at 16:32

To all my lovely readers,

Comments, whether postive or negative, are welcomed with open arms so please let me know what you think!

For all you shy people, anonymous comments are always appreciated.

Newer Post Older Post Home
Subscribe to: Post Comments (Atom)
Paris Talor. Sex blogger extraordinaire/incredibly bored graduate. I aim to be direct and honest, and maybe provide you with sex-life improving tips along the way. I welcome comments with open arms, please let me know what you think! x